Please note that this version will need to update your database. It may take a long time depending on the size of your databases and the speed of your computer. Plan your update accordingly.

We're introducing a few big and highly requested changes with this release. We've added support for the Merge Network of sites. We've added what is the beginning of our multi-currency support. We've also added a hand history viewer.

To use the new Multi-Currency feature, first go to the Configure menu and choose Configure Currency. This is where you will set your global currency. This is the currency that PT3 will convert all other currencies to. In order to see the conversions, you will need to add the new stats to your reports. The new stats are: 'Amount Won (Global)' and 'Amount Won (Native)'. A picture is worth a thousand words, so take a look at this screenshot:

Currently, the conversion rate used is the previous day's rate (this is automatically downloaded for you by PT3). We plan on offering you different methods of applying conversion rates in the near future. We currently support almost 30 currencies, so odds are good your local currency is supported.

The other highly requested feature is the hand history viewer. Take a look: 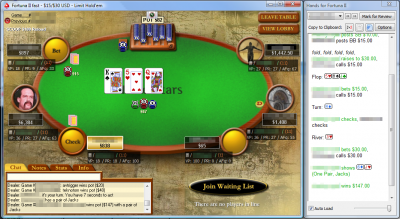 To access this window, click on the PT icon -> Show Last Hand. There are a variety of configuration options available so you can customize this window to your liking. There are buttons that will let you easily copy the hand to your clipboard, formatted in whichever way you prefer. If you play an interesting hand and want to post it on a forum, simply click on the forum button and paste it into your post. The functionality of this window is also available in the hand information window that appears when you double-click a hand in PT3.

Please note that this thread is locked. The release threads tend to become a jumble of various problems and questions that are very difficult for our support technicians to keep track of. If you have questions or problems, please create new threads for each individual issue.

Please note that this version will need to update your database. It may take a long time depending on the size of your databases and the speed of your computer. Plan your update accordingly.

I know a lot of Omaha users will be happy with the new addition of EV calculations for Omaha. It's been highly requested and we're glad to now be offering it.

We have improved our currency support by allowing you to set the conversion rate on a per-session basis. This will allow you to match your PT3 records with what the poker sites show, making record keeping and reconciling much easier.

We're continuing to work hard to bring you great new features! We hope you enjoy them and they help you improve your game. Thanks for using PokerTracker!


Please note that this version will need to update your database. It may take a long time depending on the size of your databases and the speed of your computer. Plan your update accordingly.

What follows is a detailed description of the new Smart Tournament Detection and how to use it:

Major enhancements have been made to how tournaments are classified and detected. In many cases tournament summary requests will not longer be necessary unless detailed result data on opponents is required. The "Table Type" field is now in the format:

[STT|MTT] [x-Table] (x max) SPEED:[Super-Turbo|Turbo] FLAGS:[SNG|DON|BOUNTY|SHOOTOUT|REBUY|MATRIX|RUSH|POF|SATELLITE|STEPS|DEEP]
STT - Single Table Tournament
MTT - Multi-Table Tournament
Super-Turbo - Blinds are increased ~every 3 minutes or less
Turbo - Blinds are increased ~every 5 minutes
The FLAGS parameter can be any combination of:
SNG - Sit and Go
DON - Double or Nothing (a.k.a. "Double up", half the players win.)
BOUNTY - (a.k.a. "Knockout") bonuses are awarded for eliminating players.
SHOOTOUT - a multi-table tournament that is played in phases of single-table events
REBUY - players are allowed the option to rebuy upon elimination during the initial phase. This initial phase is typically an hour or a half-hour for turbo events.
MATRIX - structured as a group of Single-table events played simulteneously. Bonuses are awarded for placing on multiple tables.
RUSH - players are instantly assigned to a new table upon the completion of a hand.
POF - Push or Fold. only Push or Fold options are available.
SATELLITE - players compete for entry into another tournament.
STEPS - similar to SATELLITE but are structured as a series of SATELLITEs leading up to a grand prize.
DEEP - starting stacks are at least 2x normal leading to longer, usually slower-paced games.

New Tournament fields (Flags, Tables, Seats, Speed) are present in the tournament filters dialog. You can now filter with much higher precision. 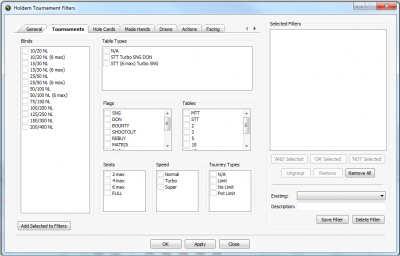 Similar fields are present in hand export and purge dialog. The following two dialogs are invoked via the Database Management dialog which is invoked from the Database Menu. 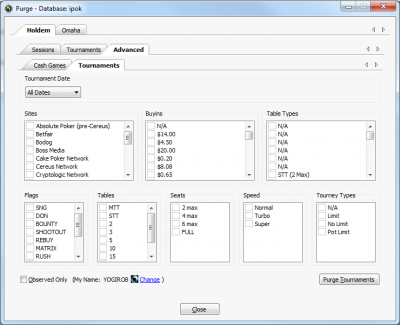 *Important Note on Tournament Auto-Detection: Auto-Detection is a process that will be continually improved. Not all tournament types can be supported in the auto-detection process, and on the initial release of the beta we do expect some errors. For some sites and tournament types they will be very accurate. Detection rules will be automatically updated when you start PokerTracker. We urge you to help us improve these results by reporting incorrect detection results.

This new feature analyzes the hands of a tournament and determines the type and can often calculate awards even when not provided in the hand history. The auto-detection process happens upon completion (or elimination) of a tournament or at the end of the import process.

To enable this feature during Auto Import make sure that the "Tournament Detection" checkbox is checked in the Auto Import tab.

A similar checkbox in Manual Import is labeled "Auto-Tournament Detect". 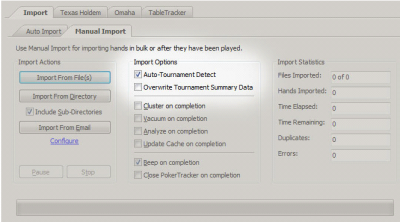 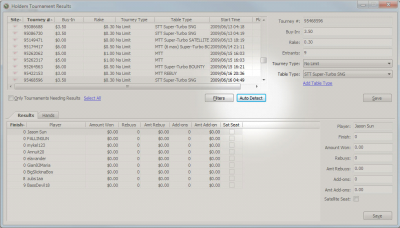 To invoke auto detect, first select one or a group of tournaments from the upper left report in the Tournament Results dialog. Then press the Auto Detect button. 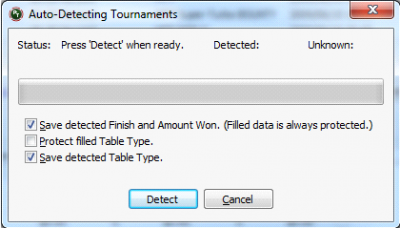 The three checkboxes are designed mainly to protect data that might have been already filled from hand histories or tournament summaries. Here is an explanation:

"Save detected Finish and Amount Won." When the detection process can determine the place and prize it will assign these values. However, if any of this data is already filled it will not attempt to overwrite any values.

"Protect filled Table Type" when this item is checked, the system will not overwrite any Table Type value with the exception of "N/A".

"Save detected Table Type." When this item is checked, the detected table type will save to the database. Otherwise it will just display the detected type in the dialog.

You can also manually set table types and other parameters from the Tournament Results dialog. This dialog is invoked via the main menu Tournaments/Enter Holdem (or Omaha) Results. 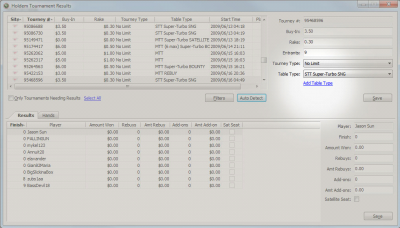 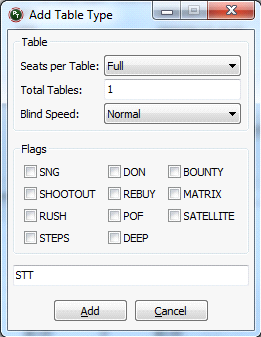 With this beta, we introduce Omaha support for TableTracker. It comes with your existing TableTracker subscription, so there's no additional fee to search for Omaha tables. There are a few limitations at this time. Currently, only PokerStars, Full Tilt, Party, and Cereus are supported. More sites will be coming soon. Also, table opening will not work for Omaha tables. Again, that will be coming soon.

We've also fixed some useful stats. There is now a built-in M stat that is accurate to the last hand played. There are also stats that let you view the most recent winners and pot sizes that you can add to your Table Averages Hud groups. These are under the various Player Statistics groups and are labeled "Table - xyz."

Other than that, this is mostly a bugfix release working towards another stable build. Please notify our support technicians if you experience any problems. Thanks!

A few changes in this release. Tournament graphs have been upgraded to be on par with the cash graphs. We've also made it possible to rearrange the order of your popup tabs in the Hud. Other than that, this is mostly a bug fix release. Please let our support technicians know of any issues you have with this version.

This is mainly a bug fix release, but we've introduced Winamax support as well. Due to the limited number of Winamax testers we have on the alpha team, there may be some issues, so please keep a close eye on the results and stats that PokerTracker is reporting and let us know if you notice anything odd or incorrect.

For this release, we've added Winamax auto-import support for the Mac version and fixed a number of bugs. Thanks to everyone who helped test.

For this release, we've added equity percentages to the formatted hand history showdowns and fixed a number of bugs. Thanks to everyone who helped test.

Return to General [Read Only]

Users browsing this forum: No registered users and 4 guests