What is All-in EV?

EV stands for "Expected Value". In situations where you or your opponents are all-in, we can calculate what the result would be if no more cards were to be dealt and instead each player was returned their equity in the pot. Your All-in EV is calculated by subtracting the total amount you bet from your equity in the pot.

What is equity in the pot?

Equity in the pot is the percentage you expect to win the pot multiplied by the size of the pot. This will tell you how much of the pot you would get if the cards were run an infinite number of times. Note that if players are all-in on the river or one player is guaranteed to win, the players' equity and actual results are the same. Let us consider the following example. Hero has AA and Villain has KK, and Hero has Villain's suits dominated. Hero and Villain are both all-in before the flop for $100 each, so the total pot is $200 (we will assume the blinds account for the rake in this example to keep the math simple). In this case, Hero will win 82.6% of the time. Thus Hero's equity in the pot is $200 times 82.6% or $165.20 and Villain's equity in the pot is $34.80 ($200 * 17.4%).

What does the graph show? 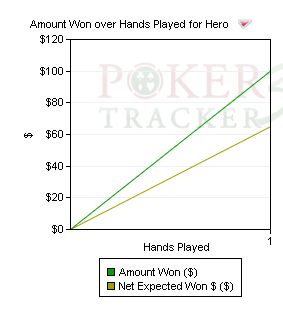 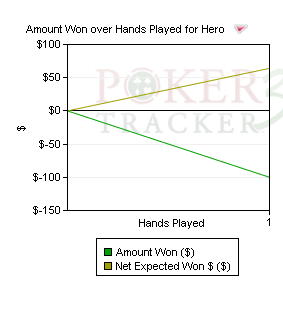 When in the hand are these calculations performed?

These calculations are performed at the point of the all-in. If, in our above example, the all-in did not occur until the flop and the flop was K72, Hero would then expect to win 8.6% of the time instead of 82.6%, changing the results drastically.

What happens in multi-way all-in pots?

So how do I read the All-in EV graph?

The All-in EV graph shows your normal results for hands that were not all-in but for all-in hands it shows your All-in EV instead of your actual results. The all-in line will differ from your actual results. If you won the example hand, your Amount Won (or green) line will be 34.8 big blinds higher than your Net Expected Won (or gold) line, since you won 100 bbs but expected to win only 65.2. If you lost the example hand your green line would be 165.2 big blinds lower than your gold line because you lost 100bbs but expected to win 65.2.

What happens in the long run?

In the long run, the Amount Won and Net Expected Won lines should end up being fairly close together* since your skill will eventually dominate the luck portion of the game. However, the long run can take an extremely long time – millions of hands or more, depending on your style of play, especially if you play with multiple stack sizes.

I was all in against two opponents and I don't see my equity, what happened?

When you are all-in and called and a player who called you later folds his hand, PT3 will not calculate your equity at the time of the all-in because we do not know all of the cards you are against in the hand.

How often does this happen?

Our tests have shown this setup occurs in tournaments about 2.5% of the time, and less often in cash games. Individual results may vary depending on your specific game type.

Why can't you just show the equity against the cards that I was shown?

The results would be very inaccurate. We believe that showing no equity is more accurate than showing very wrong numbers. Here is an example that shows how far off the numbers can be:

Imagine you get all in on the turn with the A

against two opponents who still have money left to bet. The board reads: J

, one opponent bets and the other opponent folds. At showdown you lose to 8

who rivered his flush.

, the hand might have ended very differently. Instead let us say the other opponent bets and the player with 8

folds. Now we get shown the J

Neither of these numbers (61.4% and 68.2%) correspond to your real equity. With both hands known we can calculate your equity against 8

The actual river card that was dealt is influencing which of the two hands you are going to show down against. If the river is mostly innocuous, you're going to likely see the showdown with all of your opponents - and at least in the example, likely win. If the river improves an opponent considerably, he is likely to bet and his opponent will often fold. Then you only see the showdown against the hand that improved. But both players had the chance to improve, so you cannot ignore the player who in fact did not improve because of how the board fell after you got all-in. Doing so defeats the purpose of using All-in EV.

How far off would the other calculation method be in our example?

Let us assume that if either of the two players improves, he bets, and the other player folds. We can now figure out exactly how far off the numbers would be if we calculated equity based on the cards we saw. 35.72% of the time 8

When PokerTracker does not know all cards that were in the hand at the time of the all-in, it will not calculate EV for that hand, precisely to avoid the inaccuracies mentioned above. When PokerTracker calculates your equity, it is 100% accurate. We do not accept being accurate 97.5% of the time and inaccurate 2.5%.

Boss Media do not include mucked cards in their cash game hand histories and in this case it is only possible to calculate all-in EV for hands which your opponent wins and we see all cards (when you win we do not see your opponent's cards). This would skew the results massively so all-in EV is not calculated at all for games like this.