Discuss how to create custom stats, reports and HUD profiles and share your creations.

Your columns do not specify 3 handed play so you would need to add tourney_hand_summary.cnt_players = 3.

This isn't needed. It will always be true when tourney_hand_player_statistics.flg_f_cbet is true and you are already using that. 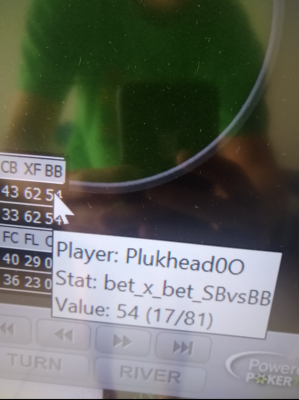 This means that the BB VPIP'd after the SB so that will not work. Use tourney_hand_summary.str_actors_p = '9' instead.

Both of these are not needed. If the aggressors string is 1 (nobody raised) then it is not possible for the player to face a preflop raise either.

For your opportunities column all of this would still be true if the player bet all-in on the flop. You can specify the player checked the turn using lookup_actions_t.action = 'X' (if they checked the turn then they couldn't have been all-in on the flop). You can also use lookup_actions_f.action = 'B' instead of tourney_hand_player_statistics.flg_f_bet
and NOT(tourney_hand_player_statistics.flg_f_face_raise) to simplify the expression.

Bear in mind that if you use these types statistics in a heads up HUD then the SB has position postflop so you'd also need to add tourney_hand_player_statistics.flg_r_open_opp to the opportunities column. It's technically not required in these columns for three handed play when SB is OOP but it's good practice to include it anyway.

No those wouldn't be possible.

lookup_actions_f.action = 'B' specifies that the ONLY action the player took on the flop was a bet so they couldn't have faced a raise.

lookup_actions_t.action = 'X' specifies that the ONLY action the player took on the turn was a check so they couldn't have faced a bet.

lookup_actions_f.action = 'B' (player bet and ONLY bet)

lookup_actions_f.action LIKE 'B_' (player bet and took exactly one other action)

lookup_actions_f.action LIKE 'B%' (player bet and made any number of possible other actions afterwards (including no second action))

For more information on pattern matching in PostgreSQL see this guide.

Users browsing this forum: No registered users and 8 guests